Marion Grodin has been one of the hottest comics in the country. She is a favorite at New York City’s top clubs, including Standup NY and Gotham Comedy Club, where she regularly headlines. As one of the country’s top emcees, Marion’s incredible ability to improvise has allowed her to master the art of talking with the audience. Always willing to be as self-revealing as she is probing of the audience…this affectionately edgy style has become Marion’s trademark. The result is a hilariously personal show that makes the audience feel like it was custom-made just for them. 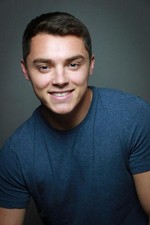 Brendan Donegan stumbled upon his hidden talent for stand-up comedy after entering and winning 1st place in the University of Scranton's Last Comic Standing competition. Immediately, he was hooked. A South Jersey native, Brendan quickly moved to the near-by city of Philadelphia after graduating to pursue his dream of performing stand-up comedy. His self-deprecating humor and boyish charm continue to keep local moms and movie theatres guessing whether he is 16 or 25. Brendan can be seen performing all over the Northeast and recently won 1st place in the Northeast Comedy Cabaret Competition and earned himself a spot as a Semi-Finalist in Helium’s Philly’s Phunniest competition.